The FDNY Foundation congratulates all of the recipients from this year’s Medal Day ceremony. We thank them for their commitment, service, and dedication, and for going above and beyond the call of duty to always help keep New Yorkers safe.

The FDNY Foundation is also proud to help fund the publication of the 2022 FDNY Medal Day Book.

Medal Day is a great day for the FDNY. We  heard remarkable stories when New Yorkers asked for help and FDNY members responded. Every day FDNY members courageously risk their lives to save others and to rescue them from harm.  Medal Day honored FDNY Firefighters, Paramedics, EMTs, Fire Marshals and Officers for their life-saving work in 2021.

Some of this year’s medal recipients included:

Firefighter Darren Harsch of Squad 270 was awarded the Chief of Department Peter J. Ganci Jr. Medal and the New York State Honorary Fire Chief’s Association Medal, the highest award for bravery to a firefighter, for his incredible rescue of a fire officer trapped inside a commercial building fire in Queens.

Paramedic Shewain George of Station 32, Paramedic Hugh Smith of Station 39, and Lieutenant Paul Ardizzone of Haz-Tac were awarded the Christopher J. Prescott Medal.  This is the highest award given annually for members of EMS Operations.The trio provided advanced medical care to multiple patients inside a collapsed building.

EMT Tiffany Robledo of Station 40, EMT Christopher Juanilla and Lieutenant Dwight Scott of Station 17 were awarded the first ever Yadira Arroyo Medal for disarming and restraining an assailant in a pharmacy, protecting multiple civilians.  The Yadira Arroyo Medal medal is named in honor of EMT Yadira Arroyo, who lost her life in the line of duty in 2017. The award represents the bravery of a woman who courageously made the supreme sacrifice in the service of others.

Paramedic Ronald A. Wolfe Sr., Paramedic Margot P. Loth, EMT Dyllon T. O’Shea, and EMT David E. Mumford from Station 58 were awarded the Tracy Allen-Lee Medal. Their quick thinking and resourcefulness enabled them to rescue six people from a vehicle submerged in water and move the vehicle to safety as Hurricane Ida made its way through New York City.

Lieutenant Keith Larsen of Ladder 149 was awarded the Brooklyn Citizens Medal and Firefighter Louis Valentino Award. Lt. Larsen led the members of Ladder149 into a fire in Brooklyn where he found a woman trapped and disoriented, and quickly removed her to safety. With the report of second person missing, he returned to the extremely dangerous conditions and removed a second victim as well.

Once again, the FDNY Foundation thanks and congratulates this year’s Medal Day recipients. We can never thank all our FDNY members enough for everything they do everyday to keep us safe.

To view more photos from the ceremony, visit: https://bit.ly/3NcvWOa 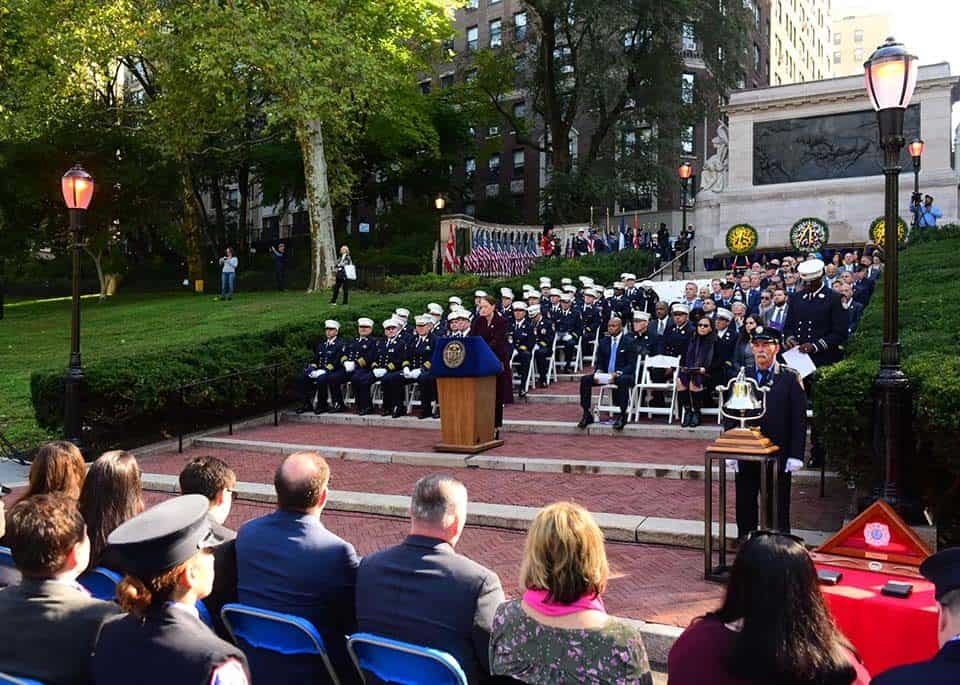