FDNY Foundation and FDNY Give Centenarian the Gift of Fire Safety

It all began with a patch from Dublin.

“It was right after 9-11 and a group of firefighters from Dublin had come in to help with the clean up,” said Ned Coulter, an educator at the FDNY Fire Zone, New York City’s state-of-the-art fire-safety learning center. “They visited here and a firefighter came in and he had that patch and said, ‘you ought to start a patch collection.’ We put it up and in no time, it grew.”

“These are places far away that have fire departments and the patch shows us that they’ve been here, they’ve visited us,” said Coulter. “They do the same things in Murmansk and Bangkok that we do here. This patch represents that.”

Nearly every fire department has a patch that best represents the work they do. Patches may reflect the geography of the area a department covers, or may be designed based on the types of fires and emergencies the department most often sees.

The official patch of the FDNY is a red, white, blue and gold design. To celebrate the nation’s bi-centennial in 1976, the FDNY held a contest for the best patch design, won by Firefighter Athos “Chris” Wonnick. The patch was then officially adopted by the FDNY and placed on all uniforms and vehicles.

“It’s the biggest topic of conversation with firefighters that come in to visit us,” said Capt. Jimmy Weisenburger, an educator at the Fire Zone. “Whether it’s as close as New Rochelle or it’s overseas – London, Belgium, Australia – it’s the first thing they ask for. Before anything else, they want to see their patch.”

The patches are organized and easily accessible thanks to an intricate system developed by educational facilitators at the Fire Zone.

“We have a whole system for finding the patches. We have domestic and international,” said Firefighter Jim Herold, a Fire Zone educator. “We have a code that allows us to find the patches, so we know, if we look in our book, and somebody says they’re from a certain city, we can find the patch easily and quickly.”

“When I first started working here, the patch location and information was something you had to learn,” jokes Weisenburger. “People ask for it every day.”

“The little ones, and even the adults, they’re amazed by that patch. They can’t believe there could be fires there,” said Coulter. “But at any given time, there are 1,500 to 2,000 people there. Even in their summer season, they can’t afford to have a fire. If a fire shut down their electricity or their means of heating the place, they could be in big trouble.”

Educators say the patches remain a point of interest for all visitors to the Fire Zone, and they’re grateful for the opportunity to start up conversations about what fire departments do both across the world, and right here in New York City.

“The firefighter tradition is a big part of it,” said Herold. “But it’s also of great interest to people who aren’t firefighters. They’re just as fascinated. We can start conversations through the patches. The patch collection helps us to talk about what firefighters do for their communities and helps lead into our important life-saving fire safety lessons.”

“When we have little ones in here and sometimes it’s the first time they’ve seen a firefighter, standing there in front of them,” said Coulter. “The patch collection helps us teach them about the importance of representing your community. And we get to instill in them what the firefighter does, how he or she serves his or her community before we teach them how they can keep themselves safe in the event of a fire. The patches are important to us and they’re important to everyone who comes in here.”

"These are places far away that have fire departments and the patch shows us that they’ve been here, they’ve visited us. They do the same things in Murmansk and Bangkok that we do here. This patch represents that." 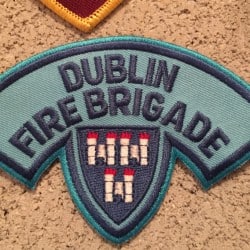 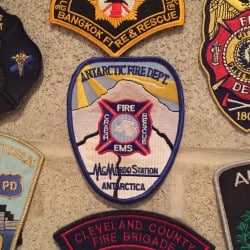 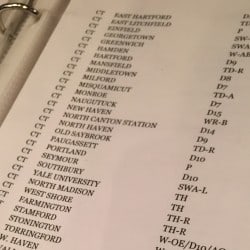