The FDNY Foundation joins the FDNY to celebrate the graduation of 29 Emergency Medical Technicians.

Fire Commissioner Daniel Nigro presided over the graduation ceremony, which took place at FDNY Headquarters in Brooklyn on Wed., Jan. 6.

“Each of you has already made a difference in our city on every single tour you have worked. You wear a proud uniform – one that symbolizes a 150-year history of service and bravery,” said Commissioner Nigro. “Our storied history has been written by many outstanding men and women who have come before you…and with your graduation today, as new EMTs, you will help us write many more new, successful chapters.”

The ceremony was also attended by First Deputy Commissioner Robert Turner II, Chief of Department James Leonard, Chief of EMS James Booth and many other FDNY officials and their families.

Over the last 12 months, the new EMTs have served as FDNY Emergency Medical Dispatchers, answering thousands of emergency medical calls and dispatching FDNY resources throughout New York City. During the past 9 weeks at the FDNY EMS Academy, they were trained as Emergency Medical Technicians in FDNY operations and procedures, and updated in all aspects of their job: CPR; patient medical and trauma assessments; oxygen and ventilation skills; management of hypotension and fractures; and spinal immobilization and emergency childbirth; and emergency vehicle operation.

Seven of the graduates attended the FDNY High School for Fire and Life Safety in Brooklyn. The seven new EMTs graduated from the high school in 2013.

“This is the largest group of FDNY High School graduates to come on the job at one time, and I want you to know that I, along with all of your instructors and teachers over the years, am incredibly proud to see you graduating here today,” Commissioner Nigro said.

“We are so proud to support the FDNY High School and its remarkable students,” said FDNY Foundation Chairman Stephen Ruzow. “We could not be more proud of these FDNY High School alumni, and of all the men and women graduating today. These EMTs have chosen to pursue a path that will allow them to step up and save a life when necessary. We congratulate them. We celebrate with them. And, most importantly, we thank them for their service to our great city.”

The high school is largely funded by the FDNY Foundation. Its aim is to reach talented, dedicated young men and women, many of whom are looking for and go onto pursue a career with the FDNY. The school is housed in the Thomas Jefferson Educational Campus in Brooklyn. Its curriculum includes special emphasis on the academic, physical and moral requirements of emergency response.

The FDNY High School is a part of the FDNY’s Workforce Development programs, which target young men and women of color who come from disadvantaged neighborhoods and likely have had little exposure to the benefits of a career in the FDNY. The FDNY Foundation, along with generous donors such as the Robin Hood Foundation and New York Community Trust, help make these programs possible.

Of the Youth Workforce Development Initiative participants, 148 have become certified EMTs, and 36 are working for the FDNY: 5 Firefighters and 31 EMTs – including these seven new graduates. Additionally, 40 graduates are working for private ambulance companies.

This year marks the 20th anniversary of the merger between New York City’s Emergency Medical Service and the FDNY. 20 years ago, the FDNY became the largest Department-based EMS provider in the world.

"Each of you has already made a difference in our city on every single tour you have worked. You wear a proud uniform – one that symbolizes a 150-year history of service and bravery. Our storied history has been written by many outstanding men and women who have come before you…and with your graduation today, as new EMTs, you will help us write many more new, successful chapters." 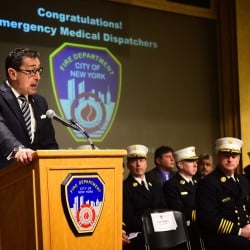 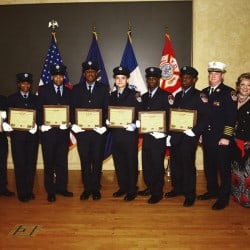 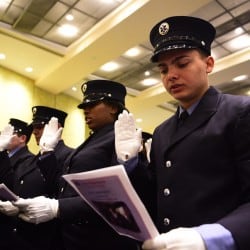 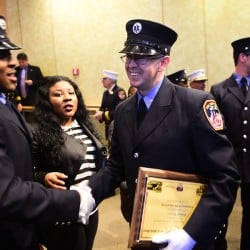 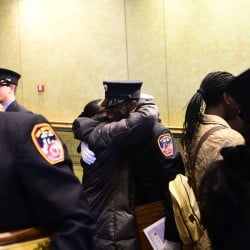